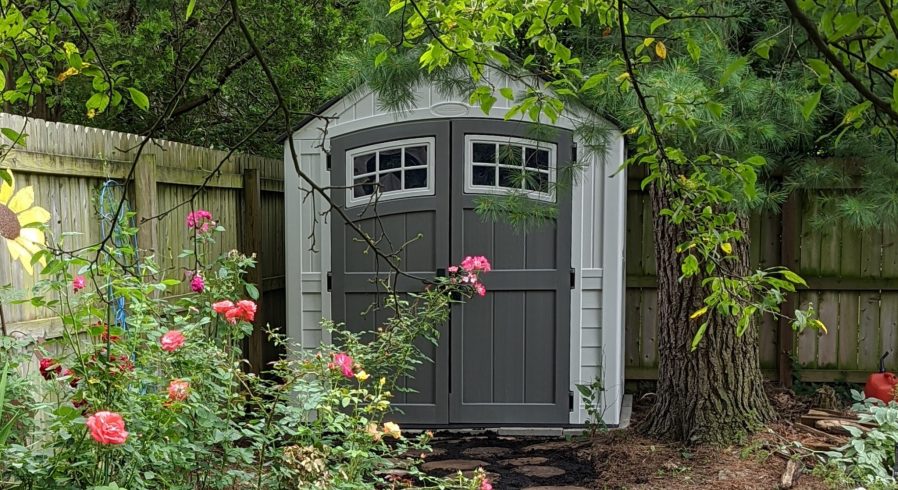 For the past few years, my husband and I have discussed the need for a new shed in our back yard. We had one years ago that nearly collapsed and had to be removed. So, recently we bit the bullet and made the purchase.

The boxes came and sat in our yard for a couple of weeks. Neither of us was keen to tackle the project. We had assumed that it would overwhelm our non-DIY abilities. And I think we were both a little frightened what the for-certain arguments that would ensue might do to our 30-year marriage.

I know I was nervous about how we might each operate under the stress of messing it up. I also expected that it would take far longer than planned. That we would have to redo steps because we would certainly install a piece wrong initially.

The thought even crossed my mind that we could just throw the stuff out and skip it. But the boxes and their contents were too heavy to just discard. Plus, there remained the expense in buying it.

The only option was to tackle the project. So, we did exactly what the instructions said, which were numerous. We followed the advice to lay out all the pieces – assembled the ones we were instructed to first. We methodically moved through the process and were meticulous in doing each step as diagrammed.

Low and behold, the shed got built in about the time the instructions indicated. The doors open and close with ease. It seems to be watertight. And the best part is that we didn’t have to redo any step of the process. Even more exciting is that my husband and I had no arguments. It is utterly amazing how it all worked. I have a tremendous amount of pride associated with that beautiful shed.

What a Shed Has to Do with Sales

Why am I rambling on about our shed building? This blog is about sales, after all. Well, it occurred to me that building that shed, and the sense of satisfaction that has come along with it, is much like a well-executed sales process.

We followed the blueprint so to speak. We did the prep work first, which included laying out all the pieces and assembling some of them before constructing the building. Not unlike assembling the information about who will be in a sales meeting and then asking questions to get to know them, the pain they might be facing and what the goal is.

It helped immensely to read through the shed building instructions a couple of times so I could get the mental picture of where were headed and the different steps that make up the process. This same discipline should be applied to a sales meeting. Before starting a conversation, it is helpful to have the steps laid out in advance. A roadmap or blueprint of where you are headed.

I do not want to imply that one should script their conversation. Instead having a general idea of what you need to know and why can be incredibly beneficial in reaching the destination. In the case of the shed, it is assembling a sturdy shelter for yard items that is easily accessible and protects our stuff from the elements. In a sales conversation the destination is always a fork in the road. Are we moving forward with the next step or possibly an agreement to do business together, or are we parting ways?

It is really that simple, but you must know what to ask before you can get to the “yes’ or the “no”. Just like our shed project worked because we read through the instructions a couple of times first, reviewing the ultimate goal and the steps to get there is incredibly helpful as you plan out your sales conversations.

The unfortunate truth is that our data on about 600,000 salespeople indicates that only 45% follow a repeatable process. And what we don’t know is if the process those 45% follow even produces results. So, I would argue that not only do you need a repeatable selling process, you also need one that works.

As I think back to our shed project, I now know why we were both dreading it so much. It was because we had both encountered instructions with previous assembly projects that were unclear and confusing, causing frustration and do-overs. And we probably also had tended to short-change the process and jump ahead. So, the lesson was easily learned:

If this resonates with you, you might be interested in a couple other articles we have written about the sales process.

Sales Leaders: The Next Step Is Most Important in the Sales Process