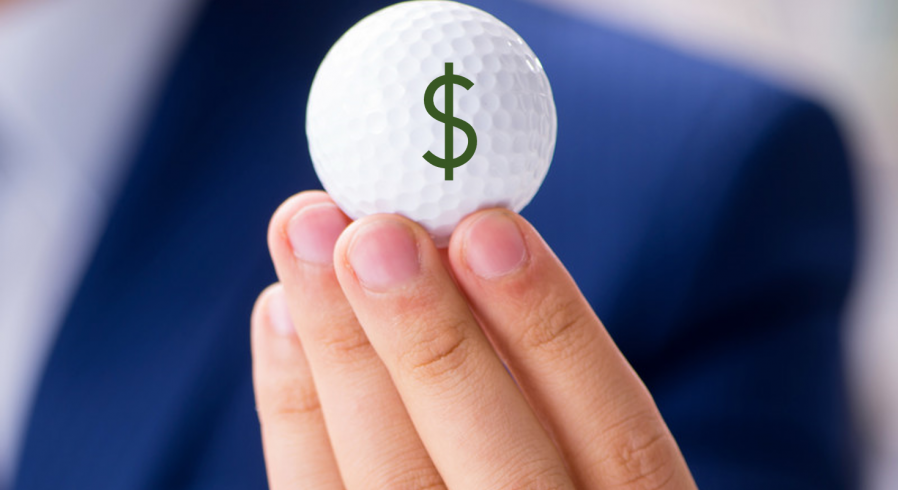 The other day, I played in a tournament with some other golfers, all trying to qualify for a national event. I failed.

I started off poorly. I quickly got into some situations on the course that were difficult to get out of and, to make matters worse, I did not putt well. My caddie encouraged me to focus on the upcoming holes and when we ran out of holes on the front nine, he said “That’s okay. You have the back nine. Just beat her on the back.”

Well, this might sound like fine advice. He was trying to get me to focus on the future and not dwell on the past – which is smart. However, he made the same mistake that many golfers, as well as sellers, often make. While fixating on the future is good, it must be the immediate future.

I needed to concentrate on every single shot as it happened. Not the entire back nine. Not a single hole and not even beating my opponent.

This is one of five key components that we can take from golf to help you and your sales reps become better sellers (and better golfers). Let’s explore.

1.    Focus on the IMMEDIATE future – Stay in the moment

In sales and in golf, it is easy to dwell on the last bad thing. It is human nature.

In golf, we can’t stop thinking about the missed putt or the shot we hit into the water. Or conversely, we might be striding down the 18th fairway and thinking if we just make par on the hole, we will break 90 or 80 or 70 for the first time ever. We think about making the putt and how great it will feel to finally get that monkey off our back. Then we double bogey.

In sales, it’s the same thing. Sometimes we focus on the thing the prospect said that was negative about us or our company and we fail to probe deeply enough. Or we listen to the voices in our head too much and get caught with “happy ears” and believe the good stuff the prospect says rather than probing for deep understanding. Then we get caught flat-footed when they reply “Sounds good. I need to talk to John Doe in Operations. So, call me back in a couple of weeks.” And guess what? They evaporate. We can’t reach them in two weeks or four weeks or four months.

We weren’t focused on the immediate future and what needed to happen to advance the sale forward. We were too emotional and caught up in our own head. This is the same problem that plagues so many golfers, both amateurs and professionals alike.

Salespeople are often creative problem solvers and so when they start to hear problems, pain points, and issues from the prospect, they want to fix everything, and their approach becomes scattered. As in golf, fixing everything usually make matters worse. Instead, there is typically a “biggest” issue that, if solved, makes the situation substantially better.

Let me give you a golf example. If you are three-putting half the greens in a round, then your biggest problem is not the occasional drive that finds the rough. Simply by cutting three-putts in half your score would improve by 4 or 5 shots. Here fixing the biggest issue, rather than everything in a golf game, results in the desired impact.

Of course, it takes a little bit of diagnosis to determine what the highest impact areas are in your golf game. It takes the same in selling. Diagnose the prospect’s situation to determine what items are causing the biggest problems and if solved, would create the biggest impact. Then focus your discussion there first.

If you cannot help the prospect with their biggest impact issues, then don’t waste your time. Focus hard only on what you can fix. Another golf example – you may not be able to ever hit a drive 350 yards, so don’t direct your energy on doing it. Instead, concentrate on what you can adjust such as your stance, your alignment, your putting and such.

If you watch a professional golfer closely, you will notice that they repeat the same pre-shot routine. It’s likely different for putting vs chipping/pitching vs full shots, but the routine for each type of shot will be the same.  They don’t even consciously think about it. They just do it. It signals the body to get ready to make the shot and it calms them when nervous.

The best sellers also have routines they follow. In their pre-call routine, for example, they might think about what they are going to say and what they are trying to accomplish.

4.    Use science rather than just feel

Most average (and below average) golfers seem to think that golf is a power game from the tee box and a finesse game around the greens. They like to just feel the shot. However, if more golfers truly understood the physics of the golf swing, the club and how the ball reacts when struck, they might fare better on the course.

For instance, one hits down on the ball to make it go up in the air. And, if a golfer moves the ball up in their stance, thinking it will help the ball go up more, it will likely cause a poor or mishit shot (too thin or too fat). What seems to make sense in reality defies science.

Now let’s apply this to selling. Thousands of sellers rely on their charm, friendliness and ability to make conversation, rather than following a more scientific approach. They free wheel it and let the conversation go wherever they feel at the time.

Unfortunately, science works against this type of salesperson if they get into an uncomfortable position. Our physiology is such that if we feel threatened or stressed, the blood flows away from our brain and to our muscles, which enables a fight or flight response. So, if we are in a sales conversation and get stressed, that is what happens. Suddenly, we can’t think as clearly. We might become too emotional and get caught flat-footed with no fallback plan. The sales opportunity is lost.

Okay, so how do we use science to benefit sales? We know that salespeople who use a repeatable predictive sales process are 15% more effective in closing business. The data on 535,000 salespeople supports this.

I mentioned above that my caddie tried to get me to focus on the next holes and motivate me with encouragement to beat my playing partner on the back nine. If I followed this advice, I would be concentrating on all the wrong things.

I actually played very well on the back nine due to something else. I directed my thoughts to what I could control along with completely concentrating on the shot at hand. I can’t manipulate what any other player does. If she had played better than me, so be it. I can only control playing to the best of my ability.

It is bad thought management to focus on the other person in sales, too. We can’t control what the prospect is going to say. We can’t even make them talk to us, let alone be honest with us. Therefore, we cannot make them buy. If we center on trying, it becomes a battle that will likely end poorly. Rather than viewing your prospect as the opponent and trying to “beat” them, spend your energy controlling your own emotions.

To steal a phrase from golf, stay “in the zone.” Think about a process – hone in on the questions you ask and your prospect’s answers. When you can stay married to this process and ignore the negative, emotional thoughts that creep in, you can be free to just have a conversation with the prospect.

Staying in the Moment

In golf, when you focus on yourself and what you are doing, rather than what your opponent is doing, or how many bad breaks you got, you will stay in the moment better and miraculously you will play better. Do the same in selling and approach each sales conversation as an opportunity to improve your questioning, your mental toughness and your focus on solving the problem at hand (from the customer’s point of view) and you will find your conversations to be more enjoyable and more fruitful.