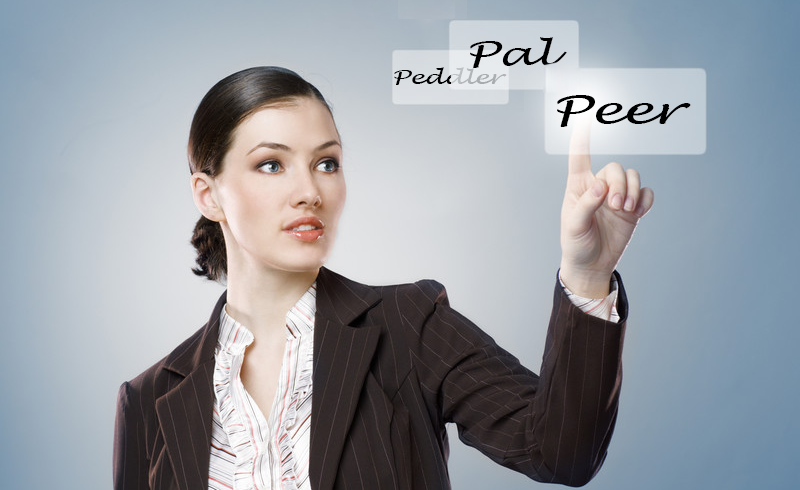 Which one of these do your customers think their salespeople from your company are most like: A Peddler, a Pal, or a Peer? Don’t know? Then they probably think they are Peddlers or at best Pals. Here’s how these three categories are defined.

Peddler: The person who hawks his wares. The peddler is basically just a conduit to a product or service. They are focused on “making the sale” not on anything the client cares about. They are concerned more with what they themselves want and need (the sale) and not outwardly on the customer. Peddlers don’t provide much value so therefore the client views them only as a vehicle to get the lowest price. No value = lowest price.

Pal: Pals are slightly more valuable than Peddlers, but not by much. And not in any meaningful way that the client assigns value to as it relates to the product or service. The Pal is a person that is nice to be around. Pleasant and liked by most. However, they focus too much on being friends rather than providing value. They, too, are internally focused and generally more interested in what the customer thinks about them as a person rather than how they can cause the customer to achieve more, overcome obstacles or eliminate frustration.

While Pals are generally liked, they may not be that respected by their customer. The customer would replace them in a heartbeat if someone came along who provided real value to their business. Customers might want to socialize with the Pal, but they won’t necessarily be loyal to them from a purchasing standpoint. Some might refer to this type of salesperson as a professional visitor. Low value = low price.

Peer: This category is the pinnacle of the sales profession. When a salesperson can attain this status with their prospect or customer it means that the customer trusts them and relies on them for advice. They are valued by the client as a resource and have attained that status by being laser focused on what is important to the client.

They care less about what the client thinks of them personally and more about what matters to the client. Peer salespeople are not afraid to push back on the client and stand up to them. Similar to how a best friend would tell you when you are being a jerk, the Peer will help the client understand when they are being unreasonable or wrong. There may be healthy tension in the relationship, but because of the trust created and therefore the value that the client places on the Peer’s perspective and knowledge, the relationship grows stronger as they work through any tensions.

These salespeople are viewed as a true peer, essential for the individual decision maker to perform in their role, mainly because the customer knows they are always focused on results for the customer. Some may also refer to this individual as a partner. High value = highest price.

So, the big question is…

Just how does one get from Peddler to Pal to Peer? Is there a magic trick to it? Unfortunately, the answer “no.” It takes hard work and requires building many selling muscles.

What do the Peers of this world have that the Peddlers and Pals don’t? There are some distinct differences and it might not be what you think. Let’s take a look.

For ease of presentation I have identified the Peers as the Top 10% of sellers and the Peddlers as the Bottom 10%. These figures are based on a database of about 600,000 salespeople from all industries, job difficulty and region of the world.

What the Data Shows

In the real world, the vast majority of salespeople won’t fall into the Peer or the Peddler category. They will land in the Pal bucket. This is the category that leaders tend to hang onto longer than they should. It is common for Pals to fill Account Manager roles and for leadership to believe they are providing value to the client. Then one day, the large client goes away, and their Pal didn’t even know they were at risk of losing the business. They were too caught up in being liked and being service oriented, as opposed to asking the hard questions that would reveal they actually cared about the client’s business enough to risk making them uncomfortable.

One reason Pals hang on is that they are nice, and people like them. Another reason, as the data shows, Pals are somewhat competent in some of the listed traits. 83% are proficient at hunting, for example, so it may seem they are able to find and make sales. But they are not the total package by and large, so they might hunt well, but not qualify well enough to focus on the right prospects to close. Pals are silently costing companies millions because they are unable to sell value consistently, and they are not viewed by the client as a necessary resource. Looking at the data again, much of the obvious differences that separate each group are not tactical selling skills. They are what we would refer to as Sales DNA or Sales Mindset. Things such as “Doesn’t Need Approval” that lurk beneath the surface like the biggest part of an iceberg have a massive impact on one’s ability to become a Peer to their clients.

Consider this iceberg picture. The smaller portion of a salesperson’s make-up are the tactical skills and systems above the surface and the much greater part is below the surface in the form of The Will to Sell and their Sales DNA (or Sales Mindset).

So how do you get a team made up of Peers rather than Pals or Peddlers? There must be focus on developing the mindset and the beliefs, in short, the softer skills as opposed to just the tactical skills. Frequently you won’t even know what is lurking beneath the surface that might be crippling a salesperson. You cannot just tell them what to do and say, you must also address their mindset and beliefs. If you need help doing this, let us know.