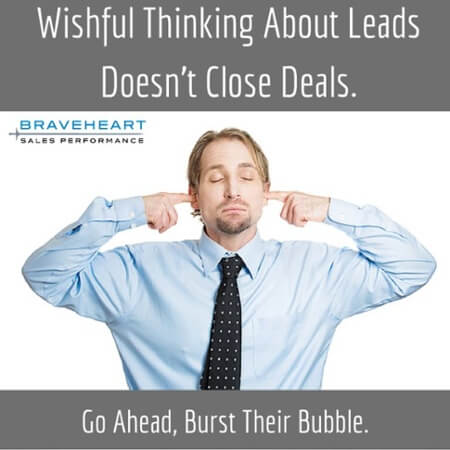 Sales Leaders: The Next Step is Most Important in the Sales Process

I was working with a sales team last week that we have been working with for just a few months. They have, on the whole, a pretty strong group of salespeople. We were discussing certain deals in their pipeline and where they were in the process. Many of the conversations were similar. “They really liked what we had. They need to talk to their boss and then they are supposed to call me back tomorrow.” Or worse, “They were supposed to call me back last Wednesday and I have called, but they don’t call me back.” There are two common flaws here that we see over and over again:

1. The salesperson believes what they want to believe. (“They really liked what we had.”)

2. No definitive agreed-to next step was established. (“They were supposed to call me back…” doesn’t cut it.)

Your role as sales leader should be to help break the cycle of wishful thinking that leads to wasted time, overstated pipelines and reduced activity. Unfortunately, most salespeople believe that prospects are 100% honest and genuine at all times. They believe this because it is easier than not believing.

For instance, if I believe that they liked what I had to say and they just need to get approval from their boss, then I can leave that deal in the pipeline a little longer. My pipeline looks nice and full and my boss is happy with me. I also don’t have to make as many proactive calls because I have enough business in my pipeline to predict success. That is the vicious cycle that our salespeople get stuck in if you, as the sales manager, don’t challenge them.

An easy fix is to require that every single interaction and every single opportunity in the pipeline has an AGREED TO next step. Rather than “they will call me tomorrow,” set an appointment for 2:00 PM tomorrow to discuss it. And if they can’t make it, be sure to let them know that you will be calling every hour on the hour until you hear back– either good or bad news.

Oh yeah, that’s the other thing. You have to encourage your salespeople to get decisions, either good or bad. Dissuade them from trying to pressure or back people into a corner. When they do that, the prospect runs and hides rather than simply telling the salesperson “no,” because they are fearful of getting sucked into an attack by the salesperson who is trying to overcome their objection. When a prospect won’t say “no,” salespeople go into chase mode and waste a lot of time and energy chasing after deals that won’t happen rather than going and getting new deals that will happen. Help your salespeople improve their success rates and reduce their wasted time on deals that aren’t going to close by making sure they can always articulate what the next step is, and that it has been agreed upon by the other party. After all, the next step is most important in the sales process!

Try honing in on the next step of your sales process with these tips and let us know how it works for you!

If you found this helpful, you may also want to read these posts:

Don’t miss our next post— subscribe to the Braveheart Sales Performance Blog! Rated a “Top 50 Sales Management Blog,” by Docurated.com.