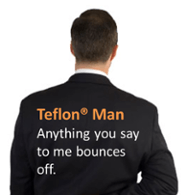 Have you ever had a sales rep who was emotionally volatile?  Okay maybe you are saying, “Is there any other kind?”  We find it to be a problem that is not necessarily acknowledged or respected.  Instead we tend to accept volatile behavior from salespeople as part of the territory.  If you do, you are doing your reps a disservice and you are allowing them to miss out on sales that they otherwise might make.

I get it.  We expect our salespeople to be animated, charismatic, even emotional.  The reality is that if they are emotionally volatile, then they are likely missing opportunities with prospects and customers because they are too wrapped up in their emotion and not focused enough on the prospect.  The symptoms are jumping to conclusions, assuming they know what the prospect is thinking, accepting at face value what the prospect says.  The outcome is that they don’t ask enough pertinent questions and, therefore they don’t learn enough about the prospect.  Frequently this lack of emotional control gets intensified when the person is in a stressful situation or selling to people that are intimidating to them.

It is the fight or flight response that messes things up.  Recall that when humans are faced with stressful situations or fearful situations the blood actually flows to their muscles to enable them to fight or flee.  The blood has to come from somewhere so it flows out of the brain.  This makes the brain less able to function well.  This, in turn, causes salespeople to function less expertly in a stressful sales call.  Their brain just doesn’t function as well and they may get too emotional.

Emotional Volatility – What to Do about It:

Teach a repeatable sales process (this alone can have a 15% improvement in sales success).   Providing salespeople with a process whereby they can stick to the plan and know where they are in the process enables them to take the emotion away and stay focused.   The more they can get  comfortable just executing the process (identifying likely targets, qualifying based on why the prospect would do something and how compelling that reason is, differentiating based on value and understanding how they will make decisions), the less they will be inclined to get emotional.

Focus on actions and behaviors.   The more you can hold your salespeople accountable to the appropriate behaviors, the less emotional a particular deal will be.  If you are helping them focus on doing the right things every day than one deal doesn’t matter that much, and one opportunity won’t make or break them, so they won’t be emotionally overcharged for any one deal or conversation.  Be steadfast in your monitoring of the pipeline too.  Do not let them get fluffy with deals that just lie around.  If you can coach your salespeople that a speedy velocity is expected of deals in the pipeline opportunities then they will be constantly getting new opportunities and moving deals through.  Excessive emotion will not be wrapped up in any one deal.

Reinforce the concept of being a Teflon® Man.  Salespeople should not get their need for approval met through prospects.  We need salespeople to NEED to close business more than they NEED to be liked by their prospects.  If they are really doing the right thing by their prospects and customers, they may have to say things that might feel uncomfortable from time to time.  They also need to learn to get a “yes” or a “no” not a maybe.  Many salespeople choose to believe a deal is a real opportunity just because the person didn’t say “no”.  The reality is that if we take the emotion out of a salesperson wanting a deal to be real, then they will try to get to “yes” or “no”, not accept “maybe” and be far more efficient in their sales endeavors.  If you can reinforce a mentality of the “Teflon® Man”, meaning anything you say to me bounces off, then they will be able to more easily accept “no” as a response and move on to the next one.  There will be less drama, excuse making, and emotion.

Grooming Teflon® men and women, coupled with using a repeatable sales process, and holding them accountable will help them deflect the negative stuff and retain a business-like, matter-of-fact approach to sales, and their sales will soar.  If you want to explore the elements, including emotional volatility, that influence a salesperson’s success click here to see a sample evaluation of a salesperson.